A host of phenomenal Queens are based out of Delaware will be preforming on one just, it’s A one night only affair. It’s will be a show no one should miss. Hosted by Anthony A. The Queens are Tracey A, Laydi Legz, Tracey Raheem, Ms Millie, Jaz “The Voice Jordon, An Letreece and Charlii Bluu. This is a line up of extreme talent all on one stage. The Queens Band members Brittney Nicole, Tina Woo, Darrly Brown and Andre Webster, these band members have preformed on tour with major signed artist. So they are ready to play and play from here to the moon. This show will sky rocket 🚀. Tickets are $25. & more at the door the night of the show. So get your tickets now. 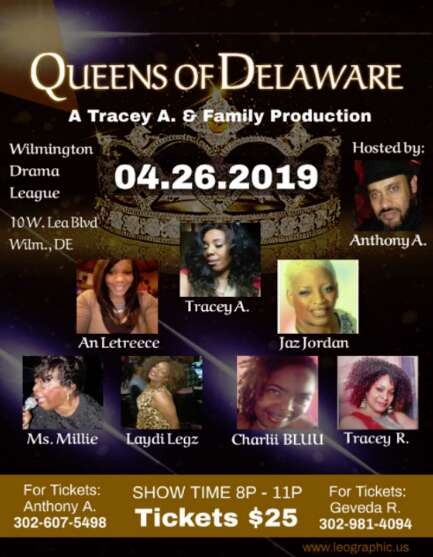 As a soft-spoken yet quirky Philadelphia-native, Christina Dianna likes her pieces to speak their own volume. The core of her work is the reflections, depth, and high contrasts she creates. Creating life and dimension is what drives her creative energy.

Producing bright highlights and deep shadows allows her work to take on a slightly animated vibe. The contrast of style within each piece is something unique to her work. The conflict between real and imitative, light and dark, contrasting colors and tones also are a core component of her pieces.
Christina Dianna favors the control she finds when using pencil, however prefers not to limit herself to one medium, style or technique. Her passion comes from the act of creating, and equally from the finished product of what she’s creating, allowing her to venture into various artistic outlets while perfecting her current craft.
FB: https://www.facebook.com/Christina.diannaart/
IG: https://www.instagram.com/christina.dianna/
ETSY: https://www.etsy.com/shop/ChristinaDiannaArt
Buy tickets to my next show: https://conceptionarts.com/artist/Rrj6y

NEW YORK (AP) – Woody Harrelson has given up marijuana after decades of what he calls partying too hard.

The actor is one of Hollywood’s most well-known marijuana enthusiasts. Harrelson tells Vulture that he hasn’t smoked pot in nearly a year.
He cites “30 solid years” of partying for his decision to quit. He also says he felt like the drug was “keeping me from being emotionally available.” Still, he has nothing bad to say about marijuana, which he calls “a great drug.”

The 55-year-old says he still drinks alcohol in moderation.
Harrelson was arrested in 1996 for planting hemp seeds in Kentucky in order to challenge a state law. Hemp is a relative of marijuana, but has a lower concentration of THC, the substance that makes pot smokers high.

“The curtain of my eyelids is raised … Old is this castle, Old is the tale enclosed by its walls. Observe carefully.”

What is this? Even those familiar with Bartok’s one-act opera Bluebeard’s Castle don’t often hear the ominous but often-cut spoken prologue employed Thursday at the Philadelphia Orchestra performance at Verizon Hall.
Intoned in heavily amplified Hungarian by the evening’s bass soloist, John Relyea, the prologue establishes that this 1911 portrayal of Bluebeard is not some bloody horror show, but a French Symbolist parable — as the legendary lady killer attempts to “go straight” with his final wife, Judith, but fails as she demands to see what’s behind every door in his castle.

The gradual psychological submission should feel like what Fifty Shades of Grey pretends to be. But this enterprising program with the opera (in concert form), paired with excerpts from Tchaikovsky’s Swan Lake, didn’t entirely come together, which meant Bartok was more episodic than entrancing. Yet the meticulously fashioned orchestration, more like Strauss than mature Bartok, makes the opera, if nothing else, a dazzling showpiece, especially with music director Yannick Nézet-Séguin on hand.
The sinewy opening bass lines felt particularly reptilian. And as different floods of sound issued forth when each door opened, the vast vista of Bluebeard’s realm had the orchestra in full cry (as only it can do) with the Fred J. Cooper Memorial Organ adding an inner electric current.
The opera’s more muted portrayal of Bluebeard’s lake of tears touched on the infinite sorrow that created it. Often, Nézet-Séguin uncovered odd little quasi-medieval musical references, adding to the sense that time melts together in this world. The piece is a bottomless pit of orchestral possibilities.
But it’s also an opera whose narrative depends on its two characters. Mezzo-soprano Michelle DeYoung and bass Relyea were positioned on each side of Nézet-Séguin, which felt right in an opera when the two characters often seemed to be calling to each other from a distance.
The orchestration is likely to cover the singers no matter where they’re positioned, but DeYoung was fully audible, at least from my first-tier seat, only in moments with the thinnest accompaniment. Her character’s emotional journey seemed to be portrayed with only one, all-purpose vocal color.
In purely vocal terms, Relyea delivered one of the strongest performances, his language projection having an authority that greatly suited his character. But when Bluebeard starts rhapsodizing about his past wives (who aren’t murdered but who become Stepford Wives), his vocal manner doesn’t follow the orchestra into this new emotional realm.
And Swan Lake? Though the excerpts touched on the story’s dark side, most music chosen for this concert — which is headed Tuesday for Carnegie Hall — were tuneful sections written for the sake of pure dance. Nézet-Séguin allowed himself moments of particular extravagance. After all, it’s ballet.
The program is to be repeated at 8 p.m. Saturday at the Kimmel Center. Information: 215-893-1999 or www.philorch.org.